QUEENSBURY, N.Y.  It was nearly time for lessons to begin, but Marcel and Kwesi could not be found. The West Mountain ski school director hurried into the rental shop looking for the missing students. Other members of the Nubian Empire Ski Club filled the benches, snapping stiff buckles into place. 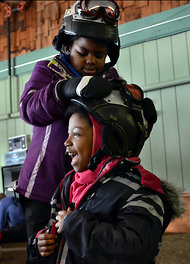 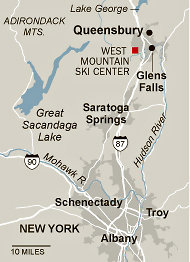 West Mountain is about an hour north of Albany. More Photos »

Omoye Cooper, the clubs president, stood among the bent bodies, sorting tickets and fielding questions, including this latest: Where were Marcel and Kwesi?

Ms. Cooper pointed out the window toward the base lodge.

At the small mountain about an hour north of Albany, the faces buried beneath helmets and neck gaiters were mostly white. But scattered among them were the Nubians, whose mission is to coax more African-Americans onto skis.

When Phil Littlejohn moved to the Albany area around 2001, he immediately saw what was missing. Mr. Littlejohn, 74, who first skied in the Poconos when he was 28, had joined black ski clubs wherever he lived.

In Albany, there was no black ski club, and this is the gateway to ski country, he said. The problem, he said, was lack of exposure.

So many African-Americans dont know what a great, great addition to their life skiing becomes, he said.

In 2001, he and a skiing novice, Peggie Allen, persuaded a dozen people who had never skied to try. They named the group in honor of the black people of southern Egypt, and so began what Mr. Littlejohn described as a labor of love.

The Nubian Empire Ski Club, which is based in Albany, has since grown to more than 40 members: experts and beginners, first graders and retirees, professors and accountants. They have skied most mountains in New York and as far away as Chamonix-Mont-Blanc in the French Alps.

This season, despite a lack of snow, the clubs youth program has drawn nine participants. On a recent Sunday they gathered on the bunny trail at West Mountain for their second lesson of the season. Brown grass edged the trails, but no one seemed to mind, soon caught up in the silly language of learning: Pizza stop. Duck walk. Sit low to slow.

Do you remember when we couldnt even turn? one little girl shouted to the boy beside her. When we used to fall and fall?

Nisha Thomas, a 31-year-old employee in the state comptrollers office, was one of three adults in the group of beginners. That Ms. Thomas ignored an oncoming cold to do so was as surprising to her as was the fact that she let Ms. Cooper, her mother-in-law, talk her into skiing at all.

Im from the Caribbean, said Ms. Thomas, who lives in Albany. I didnt grow up dreaming about snow. I think this club helps because its a sort of mentorship.

The Nubian Web site brims with instructions that people accustomed to winter sports take for granted, like layering on synthetic clothes and sunscreen, as well as the reason for buying water-resistant snow pants: Your first day will acquaint your butt with the snow. Keep it warm and dry!

Off-season, club members appear wherever they might find new recruits, visiting Kwanzaa and Juneteenth celebrations and setting up information booths in Walmarts.

When skeptics tell them black people dont ski, Ms. Cooper notes that the National Brotherhood of Skiers, a black organization that formed in 1973, has 3,000 members. It has 59 member clubs, including three in New York City.

Kimberly Barksdale, executive secretary of the group, said that for people who did not grow up with snow sports, the clubs provided critical support.

Our people in the clubs love to ski, and they also love to help others learn to, Ms. Barksdale said. They walk them through everything and really make sure they have a good time. And that sense of camaraderie makes it so much more likely that people stay with the sport.

Of 67,000 skiers who responded to a question in a survey conducted by the National Ski Areas Association at the end of the 2010-11 season, 2 percent identified themselves as African-American.

Audrey Bennett, a communications professor at Rensselaer Polytechnic Institute in Troy, said she heard about the Nubians through word of mouth two years ago. Though her son Marcel was sure he would hate skiing, Ms. Bennett, 40, pushed him to try it. Now, Marcel, 14, races giant slalom and is applying to ski academies.

I loved it after the first run, he said. I felt like I was free, like I was flying down the mountain. All my stresses disappeared.

By noon, most everyone on the beginner slope at West Mountain had turned toward the lodge for lunch  everyone but three small children who scooted back for one more run.

Look, they snuck back up, Ms. Cooper said, smiling. She watched the three, remembering her own beginnings on skis.

I wanted to conquer that hill, not let it conquer me, she said. And then I was going to quit.

But it was too late. It was too addictive, she said.

The children snaked down the hill. Wide smiles filled their faces as they reached the bottom without falling. Before they could jump back in line, Ms. Cooper glided toward them.

Do not go back up, she said. We are going in for lunch. Exit stage left. Dont worry. Well be back out.

A version of this article appeared in print on February 21, 2012, on page A21 of the New York edition with the headline: A Club Refutes the Myth Black People Dont Ski.